We continue our journey, understanding the effects of coastal erosion and climate change on cultural heritage sites by exploring how our warming winters have affected coastal erosion and what that means for cultural heritage sites, particularly along the shores of Miscou Island. This little island jetting off New Brunswick, Canada’s northeastern corner is seeing some of the most dramatic impacts of coastal erosion, climate change and the rising sea level in Atlantic Canada. Miscou Island is home to three cultural heritage sites of particular interest to us, that we will work to document. The goal of this exploration is to examine why coastal erosion is made worst in the winter months, particularly with climate change, and to see the impact of these forces on historic sites in real time. And understand better what may be lost. To date, we have found that although specific reports and plans have been made to adapt and try to overcome the rising sea levels on Miscou Island, nothing has been said about its impact on heritage. So, what can be or is being done to guard Miscou’s vanishing heritage?

So, what is coastal erosion? Coastal erosion is a natural process of weathering or breaking down of sediment and rock on shorelines (above and below the water’s surface). And although it’s considered a natural process, today its effects have been greatly amplified by human induced climate change. We have greatly impacted this process and we are seeing the serious outcomes – whether it is our desire to put infrastructure along shorelines, expecting it to remain static or continued burning of fossil fuels. Climate change and its consequences, including the rising sea level, make this natural processes more destructive.

Most of us have probably had the experience of going to the same beach from one summer to the next and noticing that it has drastically changed over the winter months. And that is because the most significant impact on our shorelines generally happens in the winter months. Winter storms are a major factor in shaping coastlines, because of their strong winds, energetic waves and storm surges. And particularly with the impact of climate change, these storms have become more intense and frequent.

Specifically, on the Acadian Peninsula (you’ll find Miscou Island at its tip), it was reported that there has been increasingly less sea ice during the winter months, resulting in increased damage from winter storms. This is due to a trend throughout Atlantic Canada, where milder winters and warmer sea surface have changed the timing and amount of ice formation along the coasts. And this is key. Without the protection of the sea ice in the winter months, abrasion of the coastlines is much more significant. Where the ice once protected against wind, waves and storm surge, now the coastline is exposed. As the Acadian Peninsula reported, their winters have also been milder, with stronger winds, bigger storms, higher and stronger tides and less snow. With higher seawater levels identified and more erosion, resulting in significant loss of land.

And while we examine all the ways that climate change is affecting our coastlines, we most often talk about how it will impact our future, while the risks to our past are discussed far less. Simply put, heritage preservation has taken a back seat to the dangers posed to infrastructure, businesses and homes. There are several heritage sites on Miscou Island that have played key roles in early Canadian identity and that are directly threatened by coastal erosion and a rising sea. But what exactly has and is being done to protect these sites (if anything) and how are they being impacted by coastal erosion?

The principal heritage site on Miscou Island is probably the Miscou Island Lighthouse. This remote lighthouse was built in 1856 at the very tip of this island, right at the entry to the Chaleur Bay. The original octagonal, wooden lighthouse is even still in use as one of the longest-serving lighthouses in the Gulf of St Lawrence. It was built in response to the numerous tragedies that had befallen mariners along the coast of Miscou over the years. It was considered “…a matter of some importance to endeavor to get a light house established there as a means of averting these evils.”

And while various lighthouse keepers came and went, and improvements were made to the structure of this lighthouse and its outbuildings, efforts to keep back the sea did not begin until 1938. It was in this year that groynes were installed near the lighthouse to help build up the shore, but these were not as long as they should have been and ended up extremely exacerbated the rate of erosion. To extend these groynes to be of use would have cost a fortune, so in 1942, it was determined that the groynes should be demolished, and that the lighthouse would have to be moved. In 1946, the lighthouse was moved 200 feet inland, onto a concrete foundation with wire stays to keep the structure stable. Today it continues to stand in this place, still in operation, now with an automated light. The shoreline continues to steadily move toward this National Historic Site, despite modern attempts to keep the ocean back through the use of rip-rap (boulders).

Saint-Charles Jesuit Mission is a significant heritage site that is shockingly undermanaged, underfunded and underrepresented. As one of the first Jesuit missions in Canada, it played a significant role in the initial contact period between Indigenous peoples and Europeans and is crucial to understanding the very creation of Canada. On the southernmost tip of Miscou Island, facing the Bay of Chaleur and Lamèque Island, lies the ruins of Saint-Charles Mission. This location was chosen by the Jesuits in about 1634/1635 as their central mission station in the region. Their goal was to serve the French fishermen and settlers in the area and of course to influence Indigenous peoples through the adoption of religion and French doctrine. However, religion was not able to overcome the harshness of the environment, with European settlers repeatedly tested with the bitterness of those early winters. Many Europeans (including Jesuits) succumbed to the elements. Owing to these challenges, the site was abandoned in 1662.

Today, along the water’s edge, the ruins of this historic mission are said to lie largely undisturbed (and barely identifiable) next to Saint Mark’s United Church, which is historic in its own right. This site barely has a sign identifying the significance of this site and no indications of preventative measures being taken to ensure the safety of these historic structures and graveyards. Having completed extensive research into this area, we’ve found no indication that this site is on anyone’s radar as an important historic site worth preserving in the face of a rising sea and coastal erosion.

The effects of climate change, through coastal erosion and the rising sea, not only impact physical historic sites, but the myths and legends that add layers of meaning and understanding to a community’s sense of past. A sense of identity is lost when we lose coastlines. The fabric of who we are, the defining moments of human existence are reduced. Suddenly myths are no longer grounded. Like many coastal communities around the world, New Brunswick has many tales of pirates and hidden treasure. On Miscou Island alone, you will find sign after sign directing you to buried treasure. After a while you can’t help but be amused by the sheer volume of tales this small Island seems to hold. Despite this concentration, one location drew our curiosity, not necessarily for its story (or rather lack of story, in this instance), but for its name.

It is said that a treasure was buried on a little Island, known locally as Treasure Island, sitting off Wilson’s Point, a point significant in its own right for its Indigenous and European history. This location was a not all together illogical place to find stories of buried treasure, as it had seen the comings and goings of pirates and privateers alike for centuries, as they stalked the Gulf of St. Lawrence and the Bay of Chaleur; hunting for new opportunities to gain wealth, among other nefarious desires. The tale starts and ends here, knowledge of the buried treasure’s location and a warning – should anyone dig for treasure here, they would be cursed and mysteriously disappear. And while this warning may ruffle your spirits, even on a calm day, one side of this island is buffeted by fierce winds and waves off the Atlantic. This sandy and small stone beach shows the signs of serious erosion happening on its shores. Tree roots stretch eerily towards the waves, while a vertical cut in the beach’s surface, reminiscent of an archaeologist’s stratigraphic plain, clearly indicate that this island is being eaten away piece by piece. But no sign of help is coming.

So, is the severity of coastal erosion amplified in the warming winter months? Without a doubt. We can see the worsening effects of coastal erosion in the winter, as we lose more and more land as a result of warmer water’s producing less sea ice. This in turn removes a layer of protection from the coastline, allowing large storm surges to pummel the cliffs and shores with waves throughout the winter. This fact means that anything near the shore will be open to loss throughout the year. Infrastructure, houses, businesses and of course, cultural heritage and identity.

A quick examination of these heritage sites shows the quality of history located on Miscou island and the threat which the changing climate brings. From a National Historic Site, moved hundreds of feet to escape the encroaching sea, to a historically significant mission on the edge of the Bay of Chaleur with barely any indication of its existence, to an island wrapped in tales of pirate treasure and curses that can hardly be accessed and is disappearing before our eyes. This place is teaming with heritage intertwined with the sea. What is important to remember in all of this is that while homes and roads can be rebuilt, once cultural heritage is swept away from its context, it is gone for good. While sand, rocks and sediment may deposit themselves once more on a beach, so too may cultural materials, but without context and without their associated materials, much of the information is lost. There is only ever one chance with cultural heritage. Once it is gone, the pieces of the puzzle are scattered, and the image cannot be brought back together. 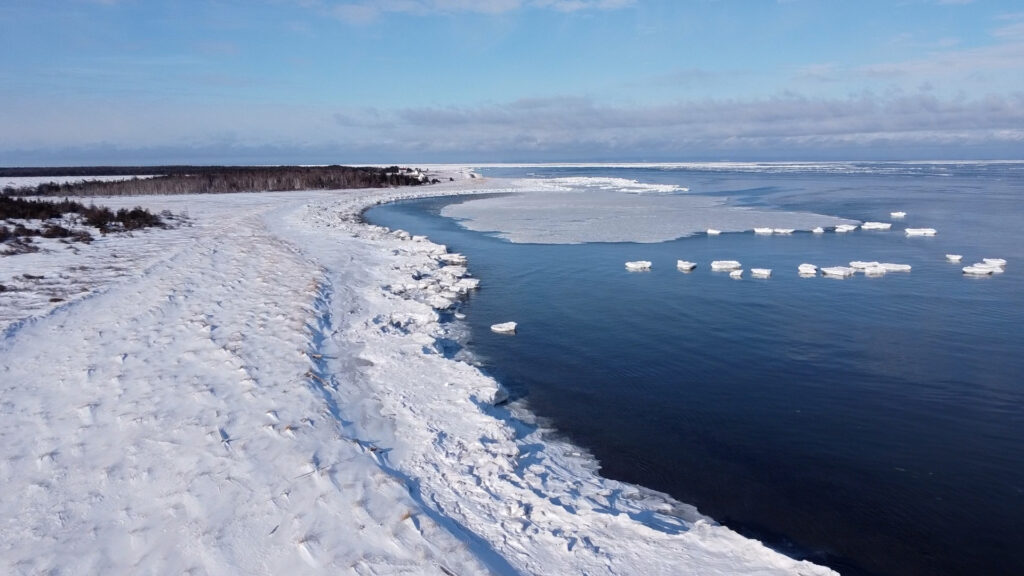