My academic and professional background has almost exclusively been focused on geoarchaeology. This specialization made a lot of sense for me and certainly came as no surprise to those around me, as I grew up with a deep fascination with rocks. Ever since I could walk, I’ve been collecting rocks. I would stroll a beach, head reverently bend over the pebbled surface, waiting for my internal “rock radar” to ping off a rock that spoke to me – maybe especially smooth, colourful, interestingly textured or a combination of features. Recently, this “radar” alerted me to an odd little rock on a beach in the Bathurst Harbour, along the Bay of Chaleur. It made me stop and really consider its presence on this particular stretch of beach. Little did I know that it would expand my horizon, love of rocks and experience in geoarchaeology, taking me on a new journey, researching an area of geoarchaeology that has been under-studied.

As it happened, we were casually walking along a beach on the Bay of Chaleur with family when suddenly a piece of flint was at our feet. And, when I looked around, I realized that there was a huge concentration of flint, all grouped together, surrounding us. Right away I was stumped. I am quite familiar with flint found in Canada, the US and Europe, but I had never seen or heard of flint in this area. In fact, I knew based on past work that flint was not naturally found here at all. So, the concentration of flint on this beach had me a little baffled. This was not a typical setting to find naturally occurring flint and with much of it showing quite a lot of weathering on its surface, like it had been sitting out, rubbed against each other and worn by the elements, the mystery thickened – Where did you ever come from?

So, I began the process of researching and digitally sourcing similar material. Sourcing “raw material” basically means that you (usually, physically) track down the original source of a geological material, which is truly fascinating and important study. It is not uncommon to find material that is not naturally occurring at a location (i.e., you might find material from Labrador in Ontario!). Finding this relocated material is crucial to our understanding of the past, especially before pre-historically, because it can tell us a lot about trade networks, communication links, relationships and more.

What is Flint? And, Why is it Important?

Now, to better appreciate why raw material can be so important to our understanding of the past, first you need to know why flint was so significant to pre-contact life. Flint is a form of chert, which is a broad category that includes material like jasper. This is a simplistic way of describing this relationship though, because there are a variety of ways people classify flint and chert with the terms even being considered interchangeable by some. Getting a little bit into the science of it, chert is a microcrystalline quartz and is a sedimentary rock. And, if you break up the words, we can find out more. Micro-crystalline – so the crystals in this material are very small (microscopic, you might say), so it should have quite a smooth appearance. And sedimentary rock – is a rock made up of sediment (essentially). You’ve probably heard of and seen sedimentary rocks before, because the earth’s solid surface is mostly made up of it – think, sandstone.

Moving a little deeper into flint’s appearance, it is waxy with a fairly neutral colour palette that includes grays, browns, blacks and some other variations. It gets its colours from the organic material within it, while other rocks in this category can get it from various minerals, like iron. Flint is also a hard rock and nearly totally made up of silica. These factors make it ideal for flintknapping, which is the practice of making stone tools, like arrowheads. Flint is particularly ideal for this process because it makes sharp, durable edges, much like glass.

Indigenous and early peoples all around the world knew how useful flint was, which is why it was a preferred material for tool making. They knew how to best use it, where to find it and what characteristics made for an exceptional knapping flint. And, while arrowheads are probably what you think of most when you think of flint or stone tools in general, this was only a part of its possible uses. It could be a knife, arrowhead, spear, scraper, axe, fire starter, in modern times a gun flint and more! Having some flint on your person was like carrying around an early multitool.

Where Did You Come From? 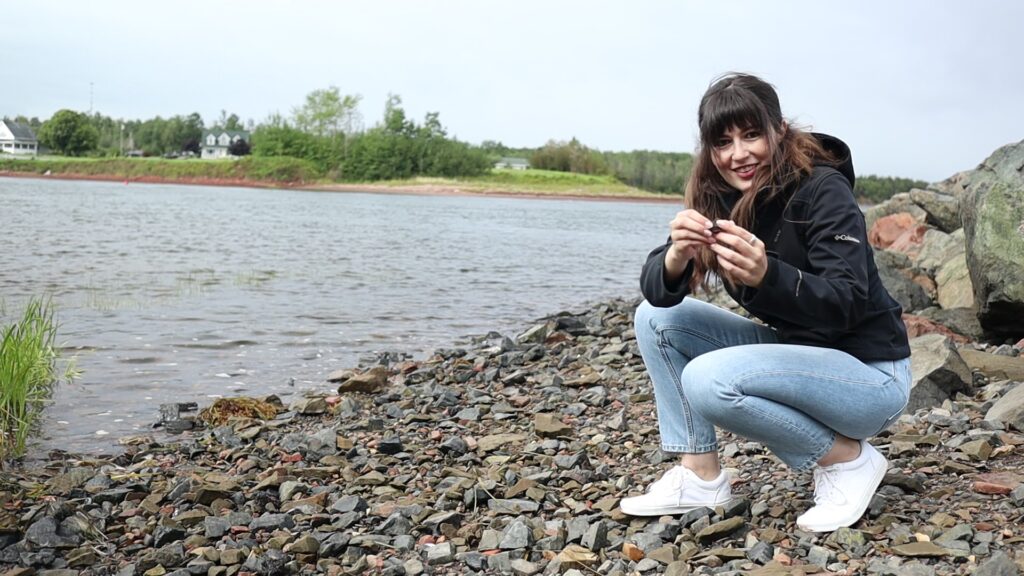 With all this information in mind, I’ve decided to take you along on my research process. I’ll share my thoughts with you as I progress in this examination and reveal findings along the way. I love getting into what exactly flint is, but I think at this point, my mind is really still on my original question – where was this particular flint coming from? As a thought experiment, I wracked my brain and came up with five general options of where this material might have come from…

Honestly, at this point I’m really not sure what the answer will be. These are just my initial thoughts as we examined the flint along this beach, using knowledge from my previous work. So, now I’m going to have to spend some time looking around at local material and doing some research to see where this flint might be coming from!

What the Flint is this? | Part III

What the Flint is this? | Part II