Review of Part 1 of Blog Series

After completing the last blog post about the flint we found in the Bathurst Harbour, along the Bay of Chaleur, I really began questioning very seriously where this material had come from. I know a fair amount about the presence or lack thereof, of flint in this part of the world. Even still, I decided to leave my mind open to the possibility that there could be a source nearby that was supplying this striking concentration of flint on a particular stretch of this beach. But none of it sat well with me. Because of work I had done in France, I actually have a collection of typical French flints, so one of my first orders of business was to compare what we had found with my international collection at home. As I held up two pieces of flint found on opposite shores of the Atlantic Ocean, I kept thinking- these are really similar…almost…too similar…

So, the in-depth research began. Once I saw this material side-by-side, I had this feeling that these similarities were telling us a lot, more than I had opened my mind to on site. And I couldn’t help thinking about how I had never heard of flint anywhere near here. So, it was time to expand the search and maybe consider that the material on this beach in Canada was actually from very distant shores. And that maybe we had an option 5.1…

What Are the Options of How This Flint Got Here?

What Is Ballast in This Context?

So, now that I’ve brought it up, you might be wondering – Ballast? What is ballast?

The gist is that when sailing ships were the cargo ships of their day, it was absolutely necessary that their holds be carefully filled with ballast, essentially weight to keep them upright (even today, ships still hold ballast, but it comes in different forms than it once did – water for one). The reality being that without stability/weight in just the right places, especially in a sailing vessel, a ship doesn’t stand much of a chance of staying upright. Without some form of appropriate ballast, in the past and today, the vessel could tip over at the first gust of a breeze or current in the water. And a horizontal ship, was a sunken ship, without the right balance of ballast in its hold. 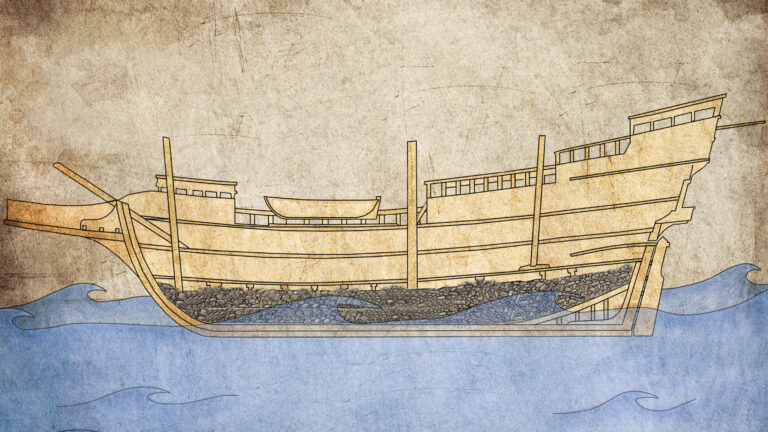 A Brief History of Ballast

In particular, the presence of European flint in North America began during the transatlantic migratory fishery of the early 16th century. Flint, as ballast, mostly came as cast offs from old mines in England and France. So, this flint was a cheap and easy weight to throw into a ship’s hold. Incredibly, physical ballast (not just flint) was dropped in eastern North American from France, England and beyond for centuries, most accounts saying until the end of the Great War, though we have well known instances of materials being dumped in Manhattan during the Second World War.

But it wasn’t just flint or regular old rocks that came across as ballast – palaeolithic artifacts, as well as plants and animals made their way from Europe to North America, not to mention building materials (like bricks), large and small rocks, trade items (cargo), sand and more. And, as ships increased in size, so too did their consumption and, ultimate, disposal of ballast. Eventually rules had to be put in place dictating where ballast could be dropped, because there was such great tonnage being disposed of. It could create navigational hazards, even infilling deep channels. It is believed that over centuries of sailing, millions of tonnes of material have been scattered all around the world as ballast.

This dispersal a result of the loading and unloading of ship’s ballast. And this was not a random process. This activity had to be precise, adjusted depending on how much cargo and other weight a ship would be carrying. This material could be naturally occurring at the port where the ballast was loaded, or it could be reused ballast from other ships that would often be easily accessed in the harbour. And, once arrived at a destination, with their loads again shifted, say cargo loaded on board, excess ballast would be removed from the ship. This cycle would continue over and over again, all around the world.

Why Do We Think Flint at This Beach Was Ballast?

So, why do we even think that the flint found on this beach in the Bathurst Harbour was ballast? What is our proof?

Starting at the most basic point of our research, after the idea came to us that this material could be ballast, we did some simple online querying and found that on Google Maps, Bathurst Harbour showed a “Ballast Channel” running through it. Combining this piece of evidence with the history we had pieced together; it was clear to us that flint ballast was very likely the culprit on this beach. 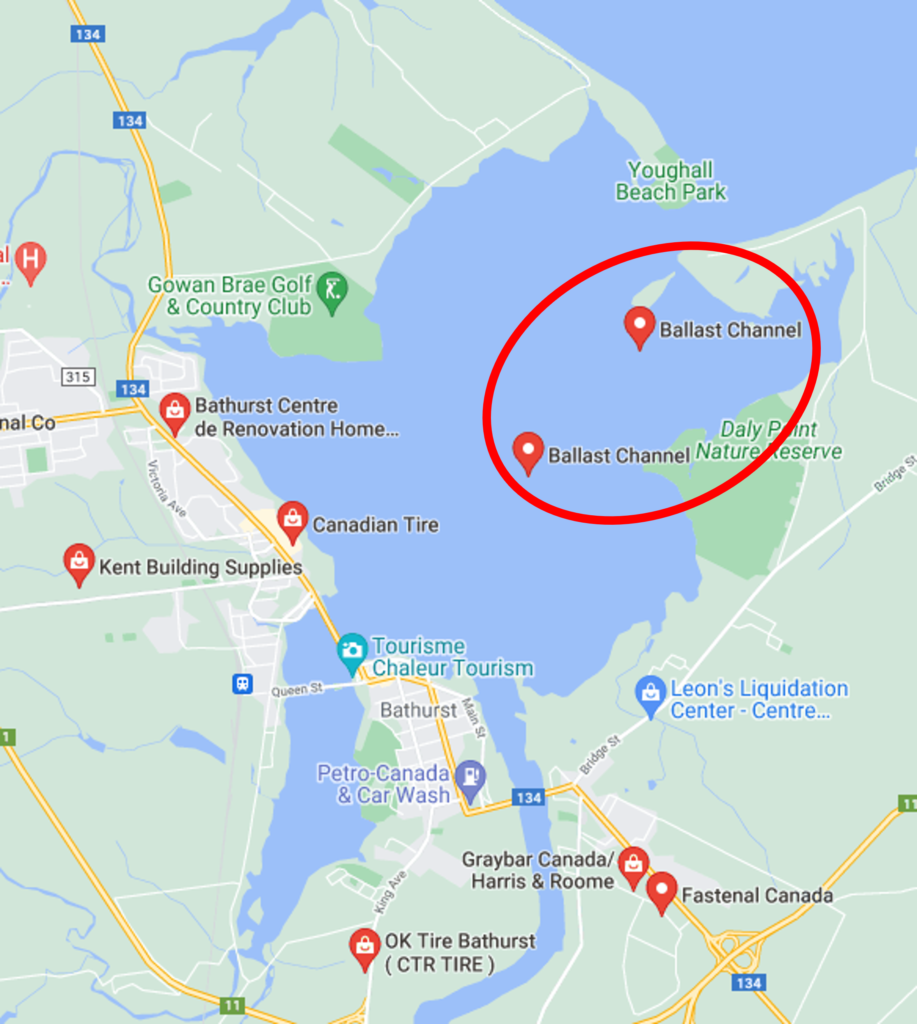 So, What Happened in The Bathurst Harbour?

Broadly, the history in the Bathurst Harbour has been rich and varied:

This harbour, off of the Bay of Chaleur, was considered “a very excellent harbour.” It has a deep, narrow entrance, wide, white sandy beaches and a sheltered anchorage that could accommodate tall ships – all traits that made it commercially valuable. This location went through various iterations of identity – from Nepisiguit to St. Peter’s and eventually, Bathurst. But, the business of this harbour never lost focus, local activities centring on this harbour – Mi’kmaq canoes, European fishing boats, trading ships, armed vessels and cargo ships all taking advantage of this ever-critical harbour. The exceptional use of this harbour throughout time, with activities focused on the water, makes it entirely possible and, in fact, definite that ballast would have been dumped here as ships loaded and unloaded their wares, particularly from France and/or England.

In the simplest sense of material analysis, the colour of flint has been used (very) tentatively to help determined where the ship had last come from. It has been cautiously accepted that gray or black flint came from England, while pale brown or honey-coloured flint was from France. This is not a reliable methodology, but a place to start when looking at this material. Interestingly, I have found all of these colours at this beach on the Bay of Chaleur – with a particularly high concentration of brown and honey-coloured flint. This could speak to higher French presence here, at least within whatever level of material was dredged up.

Why Is Ballast Interesting or Important? And What Can We Learn from It?

Ballast was and is imperative to sea faring vessels, but why is it important to us? On the most basic level, its loading and unloading can tell us a lot about the past. Ballast, if originating from its last port, would tell us where exactly it had last been and potentially what type of cargo it may have carried. Whereas, if the ballast was a mix, with material identified as being from elsewhere, this would be useful to a deeper understanding of a larger network of ports. Connecting the ballast to ports and harbours around the world, giving us another way of visualizing trade, commerce and connectivity in the past. So, even in this simplified sense, ballast is an invaluable clue to the history of not only the location it is found, but where it originated.

Another concept of particular interest to me is that of Palaeolithic (prehistoric) stone tools being brought to North America (and beyond) from Europe, and Indigenous use of these tools or raw material. This creates an interesting intersection between peoples who did not have contact with one another and is a fascinating and complicated addition to the archaeological record. Is a stone tool made of European flint, Palaeolithic or of Indigenous manufacture? Can you really know with any certainty? Could this raw material have influenced and impacted how stone tool technology evolved in North America? And, what about Indigenous people finding a Palaeolithic artifact and making use of it, or even making a stone tool from flint or other stone material brought from Europe as ballast? As you can see, the unique intersections created by this material are complex and intriguing. For me, understanding European ballast in North America is a new angle of place and time colliding, that I had never considered before.

Of all these interesting possibilities, I’m wondering, if the flint found in the Bathurst Harbour is ship’s ballast, what purpose did the ship or ships have in this bay? Was it the fishery? Navy? Trade? The Acadian Expulsion? The timber industry? Maybe even privateers? And what can this potential ballast tell us about the history in this area? I decided the best way to explore these questions further and dig in a little deeper would be to explore other similar locations in the Atlantic Provinces. So, we decided to pack-up and hit the road!

Check out the next blog where I talk about what we were able to uncover, as we explored locations in Atlantic Canada that have had significant shipping histories or are known to have flint on their shores…

What the Flint is this? | Part I

What the Flint is this? | Part III